Coinbase Share Value Could Be Thermometer for Measuring 'Crypto Winter'

It has been a rough go for cryptocurrency holders in recent weeks as values have fallen off the table. Of note, Bitcoin was soaring at more than $63,000 in early April, yet is trading under $38,000 as of press time.

Around the same time, Litecoin was $309; but it, too, has seen its value plummet and now sits around $170. Ripple was $1.91, and that price has fallen to under a dollar. Even Dogecoin, which has rallied from fractions of a penny to its high in early May, has seen its value halved from the more than $0.70 it achieved at its peak.

This has led to more than a little bit of speculation about a possible “crypto winter”—which would mean months, or more, of suppressed valuations across the board. Interestingly, as these coins were peaking, exchange platform Coinbase began trading as a public company. Almost immediately after the company’s IPO, though, cryptocurrency values began to drop precipitously. Perhaps coincidence, perhaps not, but it has been all downhill since then. 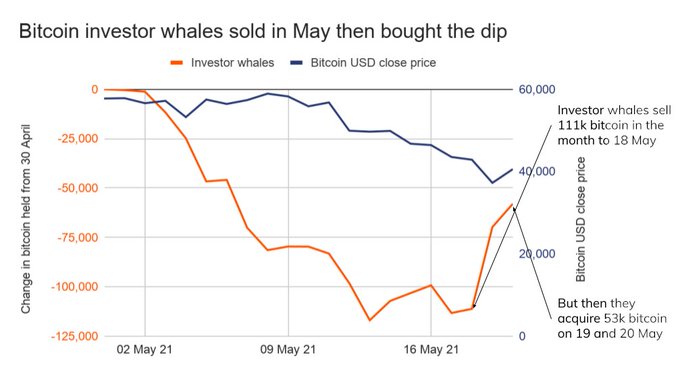 "Bitcoin investor whales sold in May, reducing balances by 111k bitcoin from 1 May to 18 May, but then they added 53k bitcoin on 19 and 20 May. This is unlikely to have moved the market, but shows they took advantage of the opportunity."

Coinbase itself, which made its offering to much hype and fanfare, has had an uneven run. Recent coverage shows analysts are still uncertain what to do with the holding, as J.P. Morgan analyst Kenneth Worthington, per information from Seeking Alpha, initiated a coverage rating at Overweight. He pointed to its “key position in the growing space of transacting cryptocurrencies” as reason for his call.

“We see the cryptomarkets as durable and growing, and expect Coinbase has the opportunity to influence and benefit from this market growth as it innovates,” writes Worthington. Worthington put a $371 price target on the name.

On the other side of the coin, Dan Dolev, an analyst at Mizuho, is much more tepid toward the company’s stock and lowered his target to $225 from $315. This, he says, is due to the very drop in Bitcoin’s price and the valuations of its peers discussed above.

“Although all outcomes are still feasible for 2021, a crypto winter may mean 15%-20% potential downside to current consensus sales expectations,” said Dolev.

"The next crypto winter is going to be a brutal one w/ a strong negative-sentiment /backlash to all the recent hype. The only question is will few select digital assets survive or will the entire sector be wiped out. One thing is for sure, BTC’s market dominance days are numbered"

According to an article from Seeking Alpha, the average rating on Wall Street for Coinbase is still bullish. Per their count, they have identified eight “very bullish” ratings, two “bullish” ratings and four “neutral” ratings.

Earlier this year, BTCC exchange founder Bobby Lee predicted Bitcoin’s price was heading to a high point of $300,000 before, ultimately, descending into a years’ long decline, according to an article from Yahoo! Finance.